In The Sexual State, I wrote about the Managerial Class and its commitment to The Sexual Revolution. Without their support, I argued, there would be no divorce on demand, no abortion on demand, no “gay marriage.”

Today, I see yet another aspect of our post-human future being created by the Managerial Class: gene editting.

A Chinese scientist defends his use of gene editting, the process which “works by using “molecular scissors” to alter a very specific strand of DNA – either cutting it out, replacing it or tweaking it.”

The technocratic elite seems comfortable enough with the process. At a major conference in Hong Kong, George Q. Daley, the dean of the Harvard Medical School is already endorsing the use of gene editing. The Chinese scientist who is being criticized just did things a bit out of order, but we are ready for “responsible” clinical use of gene editting. 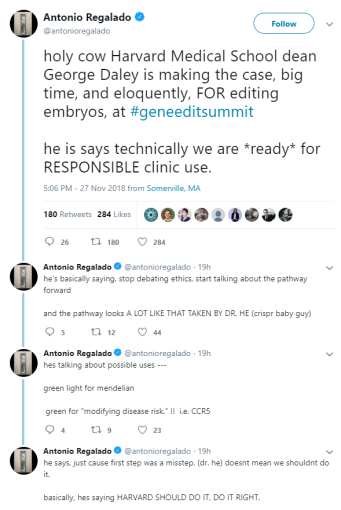 Further along in the twitter feed, we find this observation: Conflict of interest, anyone? Even further down the twitter thread, “The way this was done seems premature in practice, but not in principle.” 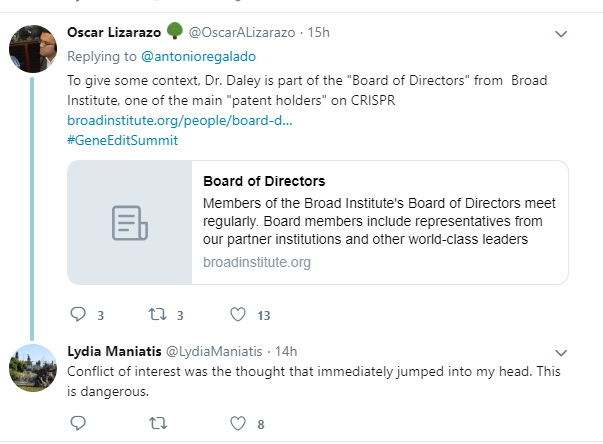 Do you understand what’s happening here? The head of one of the top medical institutions in the United States, and therefore the world, is arguing that we should start editing human genes, and stop talking about whether or not it’s moral to do so. Because trust Harvard.

Let us give this a more specific name, more specific than even “conflict of interest.” This is the technocratic, managerial global elite, playing God. Assigning themselves monstrous power over other people. At least some professionals recognize the dangers:

“If true, this experiment is monstrous. Gene editing itself is experimental and is still associated with off-target mutations, capable of causing genetic problems early and later in life, including the development of cancer,” Prof Julian Savulescu, an ethics expert at the University of Oxford, told the BBC.

“This experiment exposes healthy normal children to risks of gene editing for no real necessary benefit.”

I introduced the concept of The Managerial Class in my recent book: The Sexual State: How Elite Ideologies Are Destroying Lives and How the Church was Right All Along. I hold them largely responsible for the devastation of the Sexual Revolution. Not the ‘March of History’ or some impersonal forces: but the well-educated, well-connected technologically sophisticated Elites created and imposed the Sexual Revolution. They are going even further, with their plans to make the manipulation of human embryos sound humane.

There would be no gene editting without the Managerial, Technocratic Elite.

Members of the Managerial Class, I implore you: rethink your principles. You are playing with forces you cannot begin to understand, much less control. The less priveleged will pay the price of the mistakes of our class. Please. enough is enough.