Dreher’s chapter on the Sexual Revolution neglects both John Paul II and contraception. That struck me as odd.

St. John Paul wrote volumes, literally, on the human sexuality. Michael Waldstein, the editor of the second edition of Male and Female He Created Them: A Theology of the Body, goes so far as to say that this work is JPII’s response to Cartesian mind-body dualism. I agree with him.

Dreher liberally quotes Wendell Berry, who speaks eloquently on gender complementarity, but who can’t figure out the problem with genderless marriage.  But no mention of JPII. That is just: odd.

Along with neglecting the person of JPII, Dreher neglects the issue of contraception. The government and the major cultural elites have engaged in near-constant promotion of the contraceptive ideology: everyone is entitled to unlimited, child-free, care-free, costless sex. Without this ideology, the distortions of sexualty Dreher rightly decries would not be even remotely plausible. Perhaps these two omissions are related. He quotes Michael Hanby, in the chapter on technology. I know for a fact that Hanby understands the connection between technology, contraception and modernity. How could Dreher overlook this point?

For old people like me who are past child-bearing age, you can help the young families in your community:

I can honestly say that a lot of us Baby Boomers wish we had more kids. We were full participants in the Sexual Revolution. We didn’t figure out that we were being bamboozled until it was too late.

(If you’d like to share your story, consider contributing to our Tell Ruth the Truth blog. We’re always on the look-out for honest, heart-felt tales that will encourage the young to stay the course, and to discourage them from buying the lies of our toxic sexual culture.)

Christian sexual morality is good news for everyone, male or female, gay or straight, young or old. And, Dreher correctly observes, getting sex right is the key to rebuilding a truly Christian civilization.

I just finished reading the Benedict Option by Rod Dreher. I also recently read and reviewed Tony Esolen’s new book, Out of the Ashes, which is in my opinion, the better book of this genre. Dreher’s book has generated an enormous amount of attention. But if you only have time to read one book, read Esolen’s book.

I am not clear on whether the Benedict Option is: 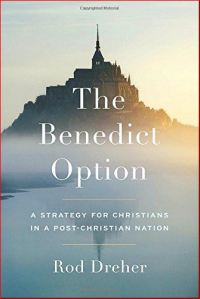 I’m not sure whether Dreher himself is clear. Option #3 was certainly the motivation of the original St. Benedict, and his many sons and daughters down to this day. And, Tony Esolen is definitely an option #3 guy.

What makes The Benedict Option worth reading:

Having said all that, I do have a couple of problems with this book, and with Dreher’s writing in general.

First, he sometimes acts as if he is the only guy who has ever thought of these things. This is an annoyance, but not a super-serious problem. He says: “One reason the contemporary church is in so much trouble is that religious conservatives of the last generation mistakenly believed they could focus on politics and the culture would take care of itself.” (pg 81)  Who ever thought that?

Further on, he makes this remarkable claim (without a footnote, mind you): “Fundamental abortion rights remain solidly in place, and Gallup numbers from the Roe v Wade era until today have not meaningfully changed.” (pg 82).

That’s odd. The millenial generation opposes abortion and favors its restriction more than older generations, even if Millenials do not self-identify as “pro-life.”  The pro-choice Guttmacher Institute breathlessly reports that states have enacted over 1,000 abortion restrictions in the past 5 years. This doesn’t sound like complete political failure to me. Nor does it sound like a complete failure of cultural engagement. On the contrary, it sounds like successful involvement in both arenas.

“Fundamental abortion rights remain solidly in place” because the Supreme Court has repeatedly circled the wagons around said “rights.”

I know very well the frustration of having Courts overturn social conservative measures that were duly enacted by voters. I was a spokeswoman for Proposition 8. I lived through that whole drama, of winning the election (quite decisively, thank you very much) and then watching courts overturn it on one flimsy pretext after another.

I sympathize with Dreher’s frustration. But enacting measures and then having the courts repeatedly overturn them is not an argument against politics per se. Nor is it an argument that we have done politics badly.

It may mean we need a new strategy.  But I do think we owe it to the people who have knocked themselves out in the public square to acknowledge their efforts. We should not dismiss them so casually as Dreher appears to do in the passage I quoted and in other places.

This brings me to my biggest complaint about The Benedict Option. He keeps saying: “We lost.” This bugs me. A lot. For several reasons.

We Christians cannot continue doing our ordinary occupations in our accustomed manner. What will come after the Modern World shakes itself apart? And what will Christians contribute?  Dreher has done a great service in inducing so many people to be part of this all-important discussion.