In a recent column, I introduced the concept of weaponized self-pity. I noted how often I’ve seen divorced parents become defensive when I talk about the impact of divorce on children.

Numerous times, my friend Leila Miller and I have assured people that, yes, of course, spouses have every right to remove themselves from a genuinely abusive environment — although these assurances often go nowhere with some of those divorced parents to whom we speak.

In a similar way, I was about to respond yet again to someone claiming that the “Catholic right” seeks to “purge” all “gay priests” from the priesthood. Then I caught myself doing for priests who identify as “gay” what Leila was doing for divorce: repeating myself.

I am an outspoken proponent of the research that links homosexually inclined clergy and the incidences of clergy sexual abuse. My colleague, Ruth Institute senior research associate Father Paul Sullins, is the author of the important report “Is Clergy Sex Abuse Related to Homosexuality?” showing such a connection. END_OF_DOCUMENT_TOKEN_TO_BE_REPLACED

Is a “purge of gay priests” imminent? Does the “Catholic right” seek such a purge?

To hear self-described “gay Catholic writer” Andrew Sullivan in his recent article “The Gay Church,” you would think the answer to both questions is assuredly a fiery “Yes!” But as an out-and-proud member of what Sullivan would characterize as the “Catholic Right,” I say the answer is “No.”

Sullivan opens his article with this factually correct sentence. “We have no reliable figures on just how many priests in the Catholic Church are gay.” However, his essay goes downhill from there. Sullivan continues: “The Vatican has conducted many studies on its own clergy but never on this subject. In the United States, however, where there are 37,000 priests, no independent study has found fewer than 15 percent to be gay, and some have found as many as 60 percent. The consensus in my own research over the past few months converged on around 30 to 40 percent among parish priests and considerably more than that — as many as 60 percent or higher — among religious orders like the Franciscans or the Jesuits.”

He offers not a single source for any of these claims. END_OF_DOCUMENT_TOKEN_TO_BE_REPLACED

When the Ruth Institute released its Clergy Sex Abuse Report by Fr. Paul Sullins in November, a number of journalists picked it up immediately. Among them, was Doug Mainwaring of LifeSiteNews. Doug’s article has been shared over 8,000 times. Here are some key points from that article:

“Although over 8 in 10 of victims have been boys, the idea that the abuse is related to homosexual men in the priesthood has not been widely accepted by Church leaders,” wrote Father Paul Sullins, a retired Catholic University of America (CUA) sociology professor, in a new report for the Ruth Institute. “The data show that more homosexual men in the priesthood was correlated with more overall abuse and more boys abused compared to girls.”

The priest said in a recent press conference that this “question comes up logically because the vast majority of [priestly sex abuse] victims were boys. Usually in sex abuse of minors, two-thirds of victims are girls.”

The report compares “previously unexamined measures of the share of homosexual Catholic priests and the incidence and victim gender of minor sex abuse by Catholic priests from 1950 to 2001 to see if these matters are related.”

While Sullins’ findings are stunning, they serve to confirm what many have suspected all along: 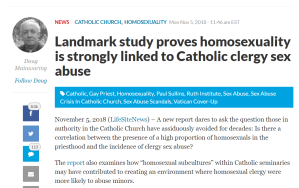