The Ruth Institute’s primary focus is family breakdown and its impact on children: understanding it, healing it, ending it. If this makes us a “hate group,” so be it.

Once again, the Southern Poverty Law Center’s “Hate Map” is in the news, this time due to CNN publishing it in the wake of the events in Charlottesville. The Ruth Institute is listed on that map as an “anti-LGBT” group. In fact, The Ruth Institute is a global non-profit organization creating a mass social movement to end family breakdown by energizing the Survivors of the Sexual Revolution.

We were first listed on that map in 2013. At that time, no one from the SPLC contacted us about the possibility of being included on their “hate map.” They made no effort to understand our mission, then or now. No one outside the SPLC knows how organizations come to be included on the list. No one knows how to get off the list. The SPLC sets itself up as judge, jury and enforcer of the charge of “hate.”

People who cannot defend their positions using reason and evidence resort to name-calling to change the subject away from their anemic arguments. The “hate group” label is a club such people invented to bludgeon their political opponents.

The Ruth Institute’s primary focus is family breakdown, and its impact on children: understanding it, healing it, ending it. If this makes us a “hate group,” so be it. 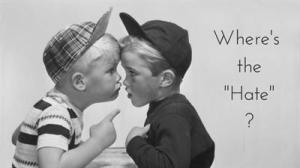 on our page called Where’s the Hate? The Ruth Institute invites the public to review these items and decide for themselves who is “hate-filled.”

The Ruth Institute categorically condemns white supremacy, racism, Nazism, and all violent totalitarian political movements. However, under the circumstances, the Ruth Institute is honored by the “hate group” label, pinned upon us by people who show no capacity for reasoned argument.

To schedule an interview with Dr. Jennifer Roback Morse, Founder and President of the Ruth Institute, please email us at  info@ruthinstitute.org.

This statement was originally published at The Ruth Institute, August 23, 2017.