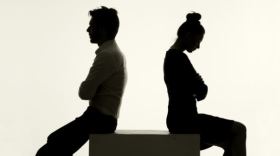 Cardinal Cupich has been holding seminars on implementing Amoris Laetitia. These “New Momentum Conferences” will “provide formative pastoral programs.” I wonder whether these seminars will include anything for reluctantly divorced persons. No one else seems to be doing anything for abandoned spouses. Perhaps Cardinal Cupich and his friends will step up to the plate.

The public, including many Catholics, has the impression that no-fault divorce allows two sensible and mature adult people to agree to end their marriage. We imagine that the state must not interfere in this mutual decision. No one should cry over the spilt milk of a “dead marriage.” Many in the Church tacitly agree.

But setting theology aside, let’s challenge the basic premise of no-fault divorce. What if one person wants a divorce and the other wants to remain married? Dr. Stephen Baskerville, frequent contributor to these pages, made me aware of this possibility in his first book, Taken into Custody. If the spouses do not agree, justice requires adjudication by a neutral party. But on what basis would that neutral party decide which spouse to side with: the spouse who wants the divorce, or the spouse who wants the marriage?

The Grand Divorce Narrative offers no answer. The official ideology of no-fault does not acknowledge that such a case can even exist. And if we add the (highly dubious) claim that “kids are resilient,” then there is no reason for anyone to favor preserving a marriage, even one with children. As for adjudication between the spouse who wants the marriage and the one who wants divorce, forget it. No-fault divorce means the state always sides with the party who wants the marriage the least.

The Grand Divorce Narrative, subtly or not-so-subtly, suggests people who complain about divorce probably did something to bring it on themselves. They need to stop whining and get with the program.

We don’t even know how many reluctantly divorced or abandoned spouses there are.

Here is one snippet. I once bemoaned the fact that we have no data on the number of reluctantly divorced persons. My friend, University of Texas sociology professor, Mark Regnerus chimed in that he had some data on this question in his new book, Cheap Sex.

I checked it out. In Figure 5.2 on page 161, he asked this question of divorced spouses, “who wanted the marriage to end, you, your spouse, or both of you?” Only 24 percent of women and 27 percent of men said, “we both wanted it to end.” In other words, in his survey, over 70 percent of divorces have a reluctant partner.

The CDC reported over 800,000 divorces from 44 states and the District of Columbia in 2016. If 70 percent of those divorces had a reluctant partner, that is over a half million reluctantly divorced people, in a single year. Add that up, year after year for forty years. That is a lot of broken hearts and wounded souls, walking around, socially invisible, and isolated.

Please note: counting reluctantly divorced persons was not the focus of Dr. Regnerus’ study. God bless him, he stumbled across it while studying something else. I don’t know of any other large scale, representative study of this question. This lack of professional and scholarly interest testifies to the power of the Divorce Ideology.

We also know very little of the lived experiences of the reluctantly divorced or abandoned spouses. We do know that divorce doubles a man’s probability of suicide and has essentially no impact on the woman’s chance of suicide. But we don’t really know why. As to spiritual life, we know that children of divorce are less likely to practice any religion. But as far as I know, no one has ever asked how divorce affects the religious commitments of the adults, particularly, one who was divorced against their will. The category, “reluctantly divorced persons” does not even exist in the minds of the scholars who have the expertise to study this sort of thing. After over 40 years of no-fault divorce, I am appalled that we have so little information about the reluctantly divorced or abandoned spouses.

And I might add, I’m also appalled at the lack of pastoral concern for the reluctantly divorced, blameless, or abandoned spouses. In all the uproar over Amoris Laetitia, in all the endless yammering in favor of “accompaniment” and “discernment,” for the divorced and civilly remarried, one can find almost nothing about the spouse of the original union.

I know an abandoned spouse who changed parishes. She couldn’t bear to see her spouse receiving communion with his new cohabiting girlfriend. He evidently “discerned” that this was hunky-dory. The pastor wasn’t much help to my friend. He told her the “people fall out of love,” and that “everyone gets an annulment.” He assumed that my friend was also dating someone else, which she had no intention of doing.

What was this pastor thinking? Why didn’t anyone ensure she feels “fully integrated” into the life of the parish where she and her husband were married?” Will anyone “accompany” abandoned spouses like her? Why is the Church abandoning them to the brutal injustice of the divorce culture?

At least on paper, the Church still holds to the radical teaching of Jesus on the indissolubility of marriage. I hope Cardinal Cupich and his friends pay attention to the reluctantly divorced, though I’m not holding my breath. Catholics, of all people, should be paying special attention to abandoned spouses. Their pain proves that Jesus was right all along.