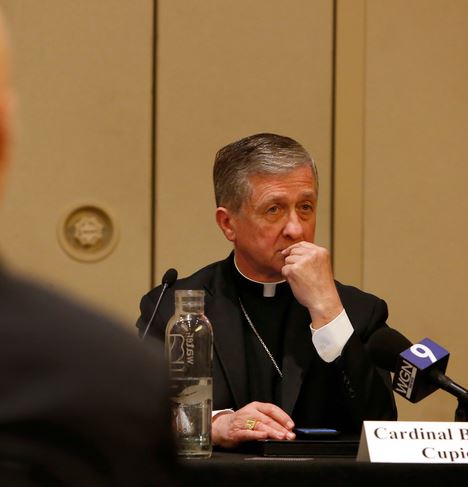 Once again, members of the Catholic heirarchy are trying to convince us that priests living a homosexually active sex life are not particularly a problem in the current crisis. I’m here to say that the lay faithful are not going to be diverted by attempts to change the subject. Clergy living active homosexual lives are causing a lot of problems in the Church.
Cardinal Blaise Cupich stated in an interview with America magazine:

In the weeks since allegations were made against Archbishop McCarrick, some commentators and clergy have suggested that allowing gay men to be priests has created a culture ripe for the kind of abuse Archbishop McCarrick is alleged to have committed.

But Cardinal Cupich said he “would be very careful” in accepting that conclusion, noting that similar claims made during the height of the child sexual abuse crisis in the 2000s were refuted by an independent 2011 report compiled by the John Jay College of Criminal Justice.

I would be “very careful” about accepting the John Jay report’s conclusions as relevant to the current crisis, for these reasons:

The lay faithful are not going to be diverted by attempts to change the subject. Clergy living active homosexual lives are causing a lot of problems in the Church. They are hurting their victims. They are also hurting the good, holy and innocent priests who are all under suspicion.

One thought on “No Cardinal Cupich, the John Jay Report doesn’t make me feel any better.”