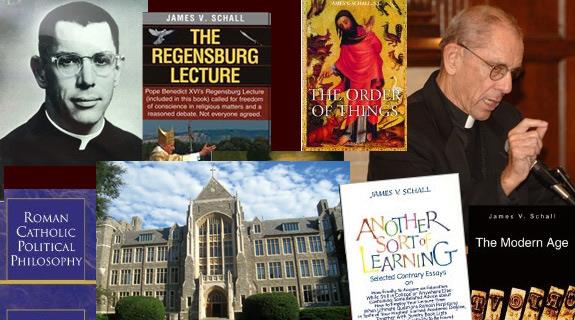 The death of a father is an earth-shattering event. When my father died in 1993, I felt disoriented. I had never been in a world that did not include him. I could feel myself move up the generational ladder. No one is above me any longer. No one who matters stands above me. When I tried to describe this to older people, they immediately understood. Old men spoke to me of the deaths of their own fathers, in the hushed tones normally reserved for the sacred.

I thought of this when I learned that Father James V. Schall, S.J., had died. He was a father to me as to many. We have all just taken a step up the generational ladder. He won’t be there anymore. Younger people will look to us now at times when we would have looked to him.

I first met Fr. Schall at an Acton Institute event in the 1990s. I was still teaching economics at George Mason and had two small children at home. I was delighted to find that Fr. Schall taught at Georgetown, more or less in my back yard. 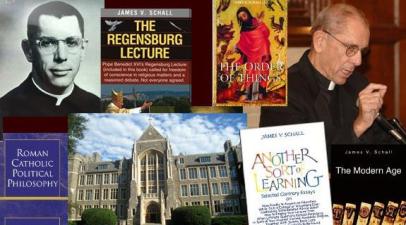 When I went to see him, he received me in the visitors’ lounge at the Jesuit Residence.  After our conversation, he walked me out to my car. When I opened the back door of my car, he noticed the condition of the interior. I was ready to be embarrassed about the evidence of small children on the floor. But then he smiled and said, “A family car.”  The love on his face was palpable. I can honestly say I had never felt so supported by any other academic colleague.

I was, after all, surrounded by economists, believers in the pursuit of a self-interest that would somehow work out in the end to the benefit of all. Most of my colleagues were at best bewildered by the time I was taking to care for my children. Some were downright hostile.

Little did I realize how much Fr. Schall, the care of my children, and economics would intersect.

A few years later, we were together at a conference on the family. He asked the question, “What is owed to the child?” I felt myself recoil from the question. I saw that same recoil from the other professors. We all wanted the answer to be, “Nothing.” Or at least, we wanted to believe that the child was owed “nothing that would impinge on my choice of sex life and living arrangements.” I was beginning to see that this answer could not be correct. I had a dim awareness that the legitimate entitlements of children impose, in turn, legitimate demands on adults. These demands were the cause of our recoil.

Children are entitled to love and care from their own parents. They are entitled to know the identity of their parents, which is, in a profound way, connected to their own identity. And children desperately need for their parents to love one another. Fr. Schall, of course, already knew all that. That is why he posed the question as he did.

Eventually, I could no longer ignore the implications of what I was coming to know. I left my tenured position at George Mason to follow my husband to Silicon Valley. He got on the dot-com roller coaster. I stayed home with the kids and got a part-time research position at the Hoover Institution. Some of my academic friends thought I had lost my mind. Others lost interest in me. I became an academic nonperson.

Fr. Schall, on the other hand, both understood and approved. For a long time, I felt he was my lifeline to the life of the mind.

I no longer recoil from the obligations children place upon adult society. But would I have figured it out without Fr. Schall’s penetrating questions and loving support? Possibly. But not likely.

We may well react to Fr. Schall’s death by saying, “We shall not see his like again.” In one sense, this is certainly true. He was a giant among the Jesuits, from a time when they were men of vast learning and deep sanctity. His death marks the end of that era.

But in another sense, I refuse to say we shall not see his like again. We ourselves have a responsibility to live up to the legacy he left us. I recall the death of another great man, Chuck Colson, in 2012. Like Fr. Schall, Chuck left an outsized footprint: Prison Fellowship, BreakPoint, the Wilberforce Forum, and Evangelicals and Catholics Together.

He also mentored and inspired numerous young people. Many of us gathered for his funeral at the National Cathedral. I remember shuddering: he’s gone; Who can replace him?

At the reception afterwards, we young protégés of his realized that we had all asked that question. We came to the same answer. No one would replace him exactly. And yet, each of us would have to replace him in our own sphere. We owed it to him to live out our vocations as thoroughly and competently as he had lived his. I sensed this commitment in that room, among us all in our various callings to ministry, academia, media, and politics.

This is the answer, the only answer really, to Fr. Schall’s death. No one is coming. God is not sending us a man on a white horse to save us. God sent us. We are the adults now. The young people are looking up to us. There is no longer anyone above us. It is on us now.

In that deeper sense, each of us will indeed be exactly like Fr. Schall, and Chuck Colson, and our own fathers, in exactly the way that matters most.